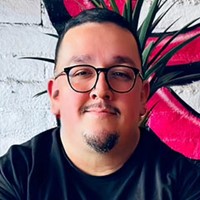 César Fierros has a deep passion for public service, politics, and communications that unite people around positive change. He began his career as a community organizer and later transitioned to congressional work in Arizona and Washington D.C. through the Congressional Hispanic Caucus Institute (CHCI). In those roles, he gained a deeper understanding of what it takes to serve and represent constituents and the importance of policy work, and its role in bettering Arizona. In 2018, César served as Regional Director for a gubernatorial campaign, leading efforts in all of Southern Arizona. He also consulted for various campaigns over numerous campaign cycles, from the state legislature to congress.

Before joining Center for the Future of Arizona, César most recently served as Communications Manager for Living United for Change in Arizona and its sister organization, the Arizona Center for Empowerment. In that role, he helped launch a multi-million-dollar bilingual digital communications campaign to support various civic engagement efforts.

César grew up in Tucson, where he graduated from the University of Arizona with a Bachelor’s degree in Law and Public Policy. In his free time, he is a “foodie” and loves to explore his palate. He also enjoys traveling and attending Wildcat basketball, Dbacks, and Suns games. César is a dog dad of a Labrador rescue named Nacho.