azcentral:
Arizona's air quality is getting worse and making people sick. Here's how we solve it

Opinion: Arizona needs to do more to curb ground-level ozone. In fact, our health and even our economy may depend on it. 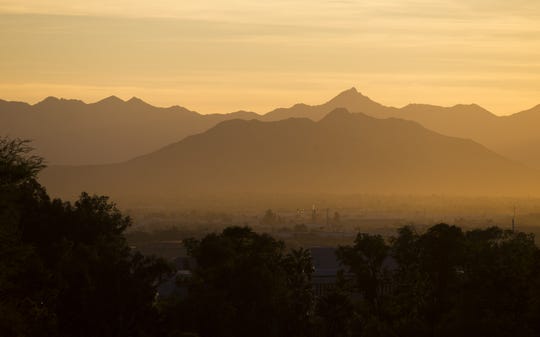 Cooler weather at last. After another Arizona summer barricading ourselves indoors, blasting the air-conditioning and binge-watching television, it’s finally time to head outdoors and reconnect with nature, friends and neighbors.

But cooler air does not mean cleaner air.

It should be no surprise to long-time Arizonans that days – even nights – are hotter than they used to be. But intense sunlight and concrete landscapes that contribute to the urban heat island do more than bring relentless summer heat.

Sunlight and heat combine with the nitrogen oxide in pollutants from auto and other emissions to create lung-irritating “ground-level” ozone. But winter provides little if any relief since cooler air keep pollutants trapped at ground level.

You might be wondering how we’ve reached a point where ozone is tightening its grip. Sunny days coupled with our attractive lifestyle make Arizona an appealing destination.

Our economy has relied on growth and with it comes more and more people taking to the roads in their cars, trucks and other vehicles for work and pleasure. The unintended consequence is increasingly hazardous air quality.

We need to put the foot on the accelerator and get into high gear with solutions before it’s too late. And I’m not just talking about our health. Continuing to grow our economy also requires action on air quality.

Our failure to secure such offsets would mean curbs on the growth of Arizona’s manufacturing sector. According to the Arizona Department of Environmental Quality the loss to the economy could be in the billions of dollars and thousands of jobs. Arizona’s attractiveness as an investment opportunity could be at risk. Could you blame companies for thinking twice about moving here under these circumstances?

How we could improve air quality

We could become a leader in electric vehicles that rely on clean energy sources. They are out of reach for many consumers, and we lack the infrastructure to support them in great numbers. But we could start planning now.

Employers could also be part of the solution by, for example:

We know from The Arizona We Want that sustainable management of our state’s natural resources – including clean air – is one of the shared core values of Arizonans.

Clean air is good for our health and good for business all year long. I commend Gov. Doug Ducey for recently speaking to the impact on Arizona of climate change.

But we need more.

We need policymakers, communities and business leaders to educate themselves about air quality and take action to protect our health and economic well-being. If not, we may have to tolerate the great indoors beyond just the summer.

Dr. Sybil Francis is president & CEO of the Center for the Future of Arizona (CFA), a nonprofit, nonpartisan organization that brings Arizonans together to build a bright future for our state.