KJZZ 91.5:
What do younger Arizonans want and need to make this state their home? 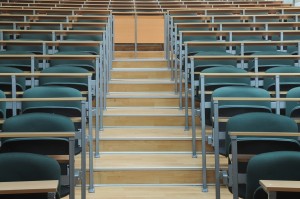 MARK BRODIE: What do younger Arizonans want and need to make this state their home? That's one of the questions a project from the Center for the Future of Arizona tries to answer. And the group has set up a Young Talent Progress Meter to track how the state is doing. It considers areas including education, diversity in public life, the cost of living and housing, access to physical and mental health and workplace culture, among other factors. Kristi Tate joins me to talk more about this. She's the director of Civic Health Initiatives at the Center for the Future of Arizona. And Kristi, first off, what are some of the key takeaways for you based on the conversations you've had and the survey you conducted?

KRISTI TATE: Absolutely. So, you know, we are really driven by a belief that our long-term success as a state depends on all of our young people being able to thrive and contribute. And that's really what drove this process to hear from young Arizonans of their, their concerns and aspirations for the future. I think a few key themes really emerged from that process, hearing from thousands of young Arizonans across the state. The first was really the desire to be heard and to have an impact. You know, whether that's in their communities and civic leadership or in workplaces, but to really have the opportunity to be in leadership roles and to help shape the future. I think there was also a really sharp focus on education and opportunity. And quality of K-12 education across the board emerged as a top issue of concern to young Arizonans. Equitable access to opportunity, being able to buy a home, you know, build a career for the long term really came through. And that oppor — opportunity to continue advancing and growing their careers — really have a sense of purpose and growth and leadership through their work path as well.

BRODIE: I would imagine that those areas weren't necessarily too much of a surprise. I mean, things like education and opportunity are things that come up a lot. Anything that you heard that really was kind of surprising, that took you back a little bit?

TATE: Yeah, well, that's a great point. I mean, we're driven by a vision called The Arizona We Want, which is really, you know, expresses the highest aspirations and hopes of all Arizonans. And I think you're right that what we heard from young Arizonans was really resonant and echoed a lot of those same concerns. I think what was unique here was having that really clear focus on Arizonans in their 20s and 30s, what does it mean to be building a long-term future here. And the really strong desire to have a sense of purpose in their career, to have a sense of kind of fairness and equity, and in that, access to opportunity leaders that represented their voices and really represented their values and were thinking about the future. I think those were things that really came into sharper focus when thinking about where they are in building a life here and, and building a career here.

BRODIE: Did the younger Arizonans with whom you spoke indicate that they wanted to set roots down here and build a life here?

TATE: Absolutely. I mean, I think one of the most exciting parts for us about this journey is we started off by saying, you know, we need to listen first and went out and held these focus groups across the state. And we had such amazing outpouring of response from young people in the process that we then launched a survey which got thousands of responses and ultimately brought in a group of new advisors, these rising leaders across the state, to join us in this project, because they do want to be a part of the conversation and really want to help shape the future here.

BRODIE: So rightly or wrongly, there has been sort of a narrative about Arizona that there is a significant amount of brain drain here. That either students leave Arizona to go to college or they go to college here, come to college here and then leave Arizona after college. How close are we given what you heard from some of these younger Arizonans about what they need to settle down here and build a life here? How close is Arizona to having that kind of environment for them?

TATE: Yeah, absolutely. I mean, I think what we were hearing across the board was that we're there —that we're really entering that next chapter for our communities in our state where young people feel like they can see a future here and they feel connected and a sense of pride really to be a part of their communities and workplaces and to help build that together. I mean, I think that, that narrative, to some extent with the data we've been using, was really digging in to understand. We know that we have a lot of our state university graduates right after graduating, staying and working here and, and contributing. But we do know that traditionally about 10 to 15 years out, we have about half of our graduates still here. And that was part of what prompted this journey for us to understand that better — what's happening at that point. But what we're hearing right now from young leaders and through this process is that, that that is starting to shift. And I think that folks are starting to see that sense of kind of commitment to this place, the sense of connection to their communities, and really that there is, you know, the potential for kind of longer term opportunity. And, of course, it's on all of us to be working together with our leaders to make sure that we're really creating the conditions where, where that's possible.

BRODIE: How important is it to Arizona and its economy and its future to have this population of people be here and want to be here?

BRODIE: So if you were to talk to policymakers in this state, what would you tell them are the top few things that they should be focusing on, like right now, in the immediate future to try to at least get the ball rolling on some of these things?

TATE: I think education, you know, front and center. Whether that was through K-12 education and concern for folks coming right out of ,out of school or raising their kids here, that was a really big area of focus of making sure that our schools are really preparing all young people to thrive. The broader set of opportunity issues around cost of living, cost of housing, and being able to really make a life here financially was really critical. And I think just this this long-term planning was really important. That came through across the board that young people, they want to be at the table and want to have an impact and play a role. They also want leaders who are thinking about the future. So even using this data and this discussion as a prompt to come together, you know, with young people in your organization, in your communities, to say, "How do we set that vision together? Where are there opportunities for action? How does this align kind of our roadmap?" You know, for the future, I think that's something that we are excited to see that energy and interest there and really that, that hope and aspiration that our leaders will really respond and be thinking long term.

BRODIE: All right, that is Kristi Tate, the director of Civic Health Initiatives with the Center for the Future of Arizona. Kristi, thanks for your time. I appreciate it.

TATE: Thanks so much for having me.