It's time to change the conversation about the COVID-19 vaccine

Opinion: Trust in the COVID-19 vaccine is paramount if we want to achieve herd immunity - which means doctors and nurses should be doing most of the talking. 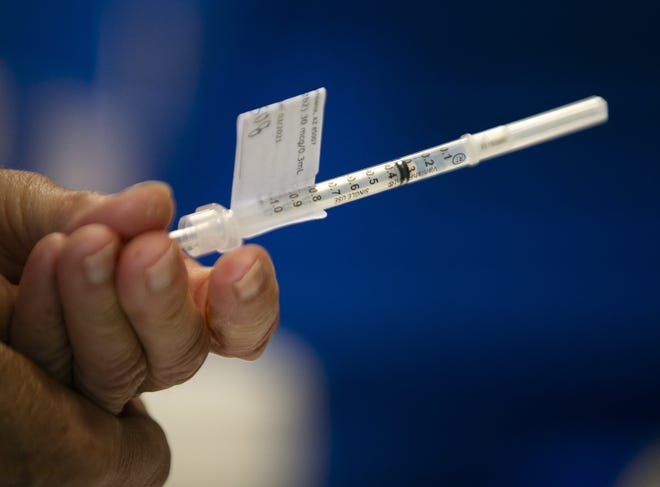 The two COVID-19 vaccines rolling out across the country are keys to first managing and then ending the pandemic.

But to achieve herd immunity, the level at which the novel coronavirus is considered under control, it is likely that 7 to 9 people out of 10 need to be inoculated. Once the logistical issues of delivering the vaccines are resolved we will need to overcome a vexing challenge: the resistance and distrust that many Arizonans have against the vaccine.

Less than half of Arizonans say they’ll get the vaccine for sure, far below the level needed to achieve herd immunity. Almost as many are unsure, and 23% say they won’t get the shots.

That’s too many Arizonans opposed to getting the vaccine to achieve herd immunity through the safer route of vaccination.

Arizonans are skeptical of the vaccine

These data come from a recent broad-reaching survey of Arizonans completed by the Center for the Future of Arizona (CFA) in partnership with the Gallup organization, which asked respondents about what matters most to Arizona’s future. The full results of the CFA Gallup Arizona Survey will be released in April.

Completed in October before approval of the two deployed vaccines, Arizonans were asked, among other questions, whether they would get the vaccine and who they would trust in making their decision.

It is not news that many Arizonans, like others across the country, are skeptical of the safety and efficacy of the COVID-19 vaccine and are reluctant or even opposed to being vaccinated. And the current focus on the logistical hurdles of delivering the doses is appropriate. But we need to start talking now about how to overcome resistance to the vaccine if we hope to achieve herd immunity.

The scientifically drawn CFA Gallup Arizona Survey elicited nearly 4,000 responses across the state. The respondents are representative of the state’s overall population, providing insights into the views of people of different age groups, income levels, race and ethnicity, and political party.

Differences among demographic groups and political parties emerged that can help inform the development of communications plans around the vaccine.

What did the CFA Gallup Arizona Survey find regarding willingness of Arizonans to take the vaccine?

There was one thing on which most respondents agreed. When asked who they trusted for public health information, medical professionals were the overwhelming favorite across the board – trusted by 89% of Democrats, 80% of independents and 66% of Republicans.

Scientists and researchers had nearly as much trust from Democrats (88%) and independents (79%), and less from Republicans (53%).

About one-third of respondents said they would trust family and friends about the vaccine – but with a major caveat.

Around half of Black and Indigenous people, who have historic reasons to be skeptical of the medical profession, put more trust in family and friends for health information than do other groups. Health professionals need to partner with trusted members of Native American and Black communities to advance acceptance of the vaccine.

Very few Arizonans – just one in four – put their trust in elected leaders for guidance on vaccines. All those high-visibility, televised moments of local and national political leaders getting the vaccine likely did little to change any minds.

Religious leaders, traditional media, the internet and social media each scored below 20% overall, though the traditional media were trusted for public health information by 38% of Democrats.

Doctors, nurses have the most trust

What these data tell us is that when it comes to the COVID-19 vaccine, the messenger matters. Messages need to be fine-tuned, matching the messenger to the intended audience. And the audience needs to believe and trust that the messenger cares.

Arizonans who are unsure about whether to get the vaccine trust doctors and nurses the most (79%), just slightly ahead of scientists and researchers (73%). That’s almost as high as the numbers for those who plan to be vaccinated and suggests that targeting those who are uncertain about the vaccine with the appropriate messaging could lead to more people agreeing to be vaccinated and raise the level of immunity in the population.

Even Arizonans who don’t plan to get vaccinated have some trust in medical professionals for their public health information (54%).

For others, a grassroots campaign will be more effective. As already mentioned, Black and Indigenous people put a great deal of trust in family and friends for medical advice. Public-health officials would be smart to develop partnerships in these communities and engage relatable individuals to promote the coronavirus vaccine.

The survey found that no matter your income, knowing the vaccine is proven safe and effective is important in deciding whether to get your shots. But for lower income Arizonans, convenience becomes a major factor. More than half of those making less than $60,000 a year said this would be important in their decision-making, compared to one-third of those making more than $120,000.

Convenient access for low-income Arizonans as well as those in rural areas or tribal lands will be paramount in vaccine dissemination, especially given the requirement for two shots.

The messenger matters. So does convenience

The federal government and the pharmaceutical industry did magnificent work in developing vaccines in record time. The vaccines are our best hope for returning to a new normal.

But all that work will mean nothing if vaccination rates are not high enough to achieve herd immunity. Trust in the vaccine is paramount and medical professionals clearly need to do most of the talking when it comes to encouraging Arizonans to take the vaccine.

Elected leaders will do well to have a solid distribution plan and to step aside and let the trusted experts assure the public of the safety and efficacy of the vaccine. Convenience will matter, as will a clear understanding of what that means for poor Arizonans and those living in rural areas.

And the messenger matters. Who is in the best position to help skeptical populations gain trust in the vaccine? We need to move the conversation away from one focused on who won’t take the vaccine to one focused on how to persuade reluctant Arizonans to be vaccinated.