azcentral: No one wants to work anymore? That's not true. They just want a quality job

Posted on August 08, 2021 • Category: Op-Ed
By Sybil Francis – President & CEO, Center for the Future of Arizona

Opinion: The pandemic changed the way people view work. Many are rethinking what work means and how they spend their time. Wise employers will pay heed. 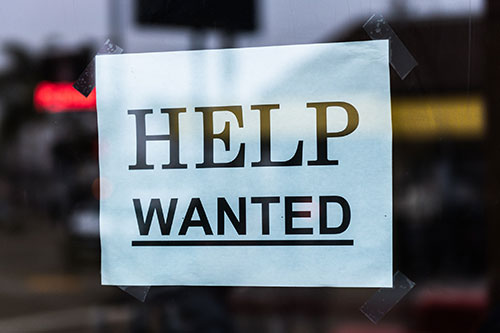 The fast-food restaurant sign became a viral sensation, getting millions of views. “We are short staffed,” it reads. “Please be patient with the staff that did show up. No one wants to work anymore.”

But is it true? Employers are reporting difficulty filling open positions, something that’s never happened coming out of a recession. Many blame the extra $300 a week in unemployment insurance included in federal COVID-19 relief bills. More than two dozen states, including Arizona, agree and declined the extra money.

Statistics and anecdotal evidence, however, suggest more is at play. Americans are less interested in holding any job. They want a quality job.

The pandemic changed how we view work

The pandemic changed the way people view work. Many are rethinking what work means to them and how they spend their time. If you only live once, the thinking goes, why spend it in a job with little mission and impact, lousy pay and benefits?

Workers are dissatisfied with what they are offered

Workers want quality jobs. Because they appear to hold the upper hand in this recovery, they can make informed choices about jobs, including wages, hours and benefits.

The recent Center for the Future of Arizona-Gallup Arizona Survey offers insights into what Arizonans want from a post-pandemic job. The survey late last year found the highest ratings for job satisfaction came from workers in the nonprofit sector – workers who value gaining a sense of purpose in their job.

Among employed Arizonans, fewer than 3 in 5 were satisfied that their employer offered equal pay or equal opportunities for promotion. Barely half thought they had access to the education and training they needed to advance their careers.

Arizonans making under $60,000 were even less satisfied. They were between 20 and 22 points less satisfied with the benefits, mission and impact of their work than those making more. That’s a lot of dissatisfied potential talent.

Most would rather earn their way. Now, though, they can be selective about where they work. Instead of putting up signs that say, “No one wants to work anymore,” this is a moment for employers to differentiate themselves. They can sign on to the philosophy of the Business Roundtable’s revised Statement on the Purpose of a Corporation that companies should deliver value to their customers, invest in employees and support their communities.

Local employers are stepping up

How can they do this? Watch what others – big and small – are doing.

Many are going beyond minimum wage. Chipotle pays $15 an hour along with an industry-first monthly crew bonus program, tuition assistance, health benefits with robust mental health coverage and a 401(k) plan.

When specialty coffee roaster Xanadu Coffee Co. opened its first shop in downtown Phoenix, it chose not to accept tips. Instead, prices are set high enough to start baristas at $15 an hour, with a transparent goal of getting to what co-owner Randall Denton calls a living wage of $17 or $18 an hour.

Some workers will take slightly lower pay for a stable schedule or a job that gives them a sense of purpose. They’ll stick with jobs that feature good managers and opportunities for advancement. Some are attracted by benefits or culture.

Fry’s Food Stores and Best Buy cross-train employees, which rounds out associates’ skills as they seek advancement, allows for more stability in scheduling and gives the company more flexibility. It also emphasizes talent development opportunities and creates a culture of inclusion.

Skyler Reeves, owner of five Prescott restaurants, sought to make life easier for kitchen staff by scrapping difficult-to-make menu items and buying equipment to streamline dishwashing. He also offered to pay tuition at Yavapai College, which immediately brought in 40 applications when he had been getting almost none.

Going one step further, Waste Management will start paying tuition for the family members of its office and front-line employees in 2022.

Policymakers can help, too. Groups as diverse as Jobs for the Future, the Aspen Institute and the Corporation for a Skilled Workforce have suggested ways that state and federal governments can support business in offering quality jobs.

A task force organized by The National Skills Coalition and Business Leaders United, which included the Center for the Future of Arizona’s Holly Kurtz, recommended the current administration help retail and hospitality workers recover via:

Likewise, employers across all industries should invest in talent development, which can begin with career exploration in middle and high school. Industry and education sectors can work together to design, implement and scale seamless college and career pathways that enable students to transition smoothly into post-secondary education and on to family-supporting careers.

Every American felt the effects of the pandemic, some more heavily than others. Those in front-line and service jobs took the toughest economic hits. Zoom calls and social isolation took a toll on office workers.

All have had the opportunity to reflect on what they want from work, and they’re making their choices now. It’s not that no one wants to work. People want quality jobs and an equitable economic recovery. Employers who want to build a strong business, aided by policymakers, will deliver it.

Sybil Francis is president & CEO of the Center for the Future of Arizona, a nonprofit, nonpartisan organization that brings Arizonans together to create a stronger and brighter future for Arizona.