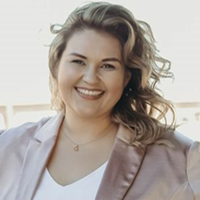 Why are you in Arizona?
I’m a “border brat.” I was born and raised in Yuma and have family on both sides of the border. My mother is Hispanic and my father retired military (Anglo). I’m bilingual and that has been advantageous in my career. I currently serve as the Executive Director of The Greater Yuma Port Authority.

What concerns you?
I was diagnosed with cancer a few years ago and had to travel to Phoenix for treatment because the number of medical specialists is limited here. After two rounds of treatment, I was told the cancer might have returned but they would check again in three months. I was not willing to wait and went to Mexico for care and sought holistic treatments. Proud to say I am cancer free. Yuma is the third largest economic region in Arizona. We need better access to specialized medical care other than trying to car-pool to Phoenix.

Why would you leave?
Living on the border is attractive to me and I have no plans to leave. But my goal is to further pursue my urban planning and development studies. I am currently enrolled in ASU online. Yuma has limited educational programming options, hence why I went for an online course.