WASHINGTON, D.C. -- As the massive effort to distribute COVID-19 vaccines continues, state leaders face formidable hurdles -- including public hesitance to receive the vaccine. In an ethnically diverse and politically divided state like Arizona, public education campaigns must overcome widespread mistrust of government with fine-tuned messages delivered by the right messengers.

A recent study by Gallup for the Center for the Future of Arizona finds that Arizonans are likely to find messages about the proven safety and efficacy of the vaccine to be important or very important. They are also most likely to trust medical professionals (77%) and scientists or researchers (72%) for public health information. By contrast, Arizonans are least likely to trust social media, a common source of misinformation about the pandemic. 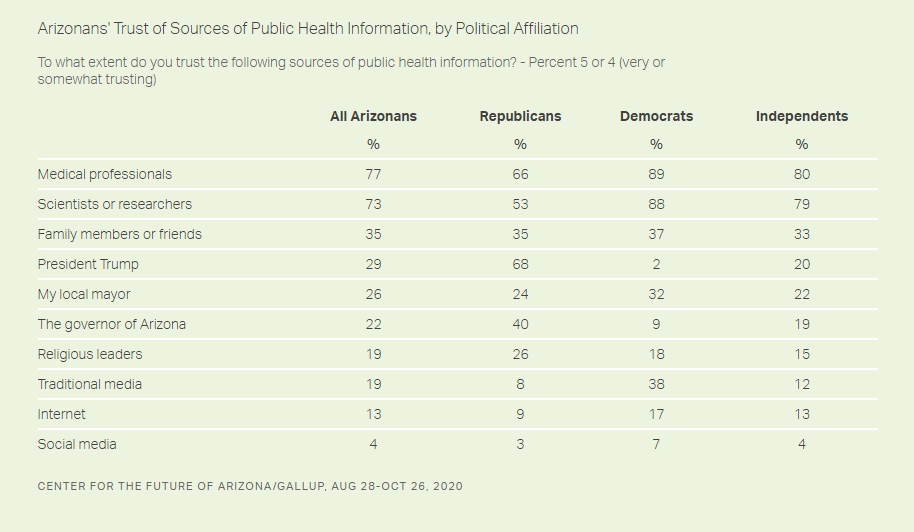 These results come from a representative survey of 3,586 Arizona adults conducted from Aug. 28-Oct. 26, 2020, which included oversamples of Black and Native American residents to ensure sufficient sample sizes of those subgroups for analysis. The full survey measuring Arizonans' views across a broad range of coronavirus issues is scheduled for release in April 2021. However, this information about vaccines is being provided now because of its current relevance to public adoption of recently approved vaccines.

Importantly, the survey was completed prior to the November announcements that vaccines by Pfizer/BioNTech and Moderna are highly effective, or approval of those vaccines by the FDA. There is some evidence these events may have raised vaccine acceptance rates at the national level. Arizonans' willingness to trust various sources of health information may also have been affected by these events, with prior studies suggesting major events can lead to modest changes in Americans' willingness to trust authorities.

Though there were significant differences in Arizonans' views about sources by political affiliation, at least two-thirds of each partisan group agreed that they trust medical professionals (by selecting 5 or 4 on a five-point agreement scale) -- including 66% of Republicans, 89% of Democrats and 80% of independents. Unsurprisingly, Republicans were far more likely than Democrats or independents to say they trust President Trump (68% vs. 2% and 20%, respectively) and Governor Doug Ducey (40% vs. 9%) -- both Republicans. Democrats were more likely than Republicans to say they trusted traditional media for public health information, but no more than 7% in any partisan group trusted social media.

In some cases, recruiting members of local communities for vaccine messaging may be particularly important in building trust. In Arizona, leveraging social networks to convey information may be particularly effective among Black and Native American residents, given their higher-than-average likelihood to say they trust friends and family members for public health information. Trust among Latino Arizonans, who represent 32% of the state's population, is similar to that of White and Asian Arizonans and similar to Arizonans overall.

Vaccine Hesitancy Common in Arizona, as in the U.S. Overall

In line with the Southwestern trends, Arizona's average coronavirus case tally had been climbing since early October, and the state was one of 15 to post record average case counts in early December. Vaccine distribution promises to lower the state's case counts dramatically in the coming months.

However, though vaccine acceptance rates may have risen in line with national figures in more recent months, the August-October CFA/Gallup survey found widespread hesitancy among Arizona residents. Overall, 40% of Arizonans said that when a vaccine becomes available, they would choose to get it, while 23% said they would not, and 37% said they were unsure. Similar to political and racial patterns among the U.S. population, Republicans, as well as Black and Latino adults, were among the least likely Arizona residents to say they would get the vaccine when it became available.

In a series of follow-up questions, Arizonans were asked about key factors in their decision on whether or not to be vaccinated. The safety and effectiveness of the vaccine was most commonly seen as important or very important, with 82% rating it a 5 or 4 on the five-point agreement scale. Just over half (55%) rated their doctor's recommendation as important -- though this figure rises among older Arizonans (to 63% among those age 55 and older), who are more likely to see medical providers on a regular basis.

Convenience in getting the vaccine was least commonly cited as a consideration; nonetheless, almost half of Arizonans (45%) said it was a very or somewhat important factor. Considering the logistical challenges in distributing vaccines with precise temperature requirements and two-dose administration in areas with weaker infrastructure, such as Native American tribal lands, convenience may be a substantial barrier for those who have been among the hardest hit by the virus. Lower-income Arizonans were particularly likely to say convenience was an important factor, including a majority (55%) of those with household incomes under $36,000. 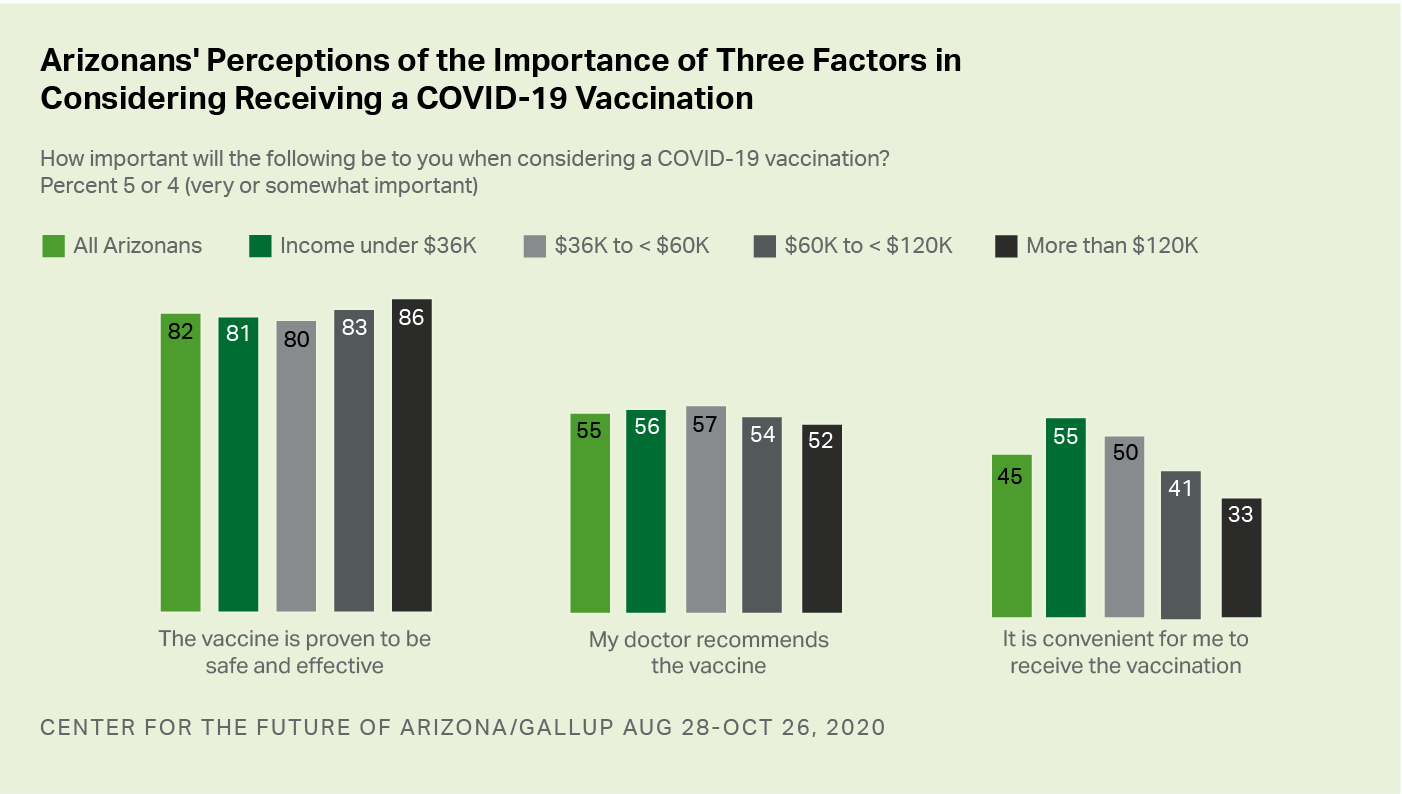 Trust in Health Officials, Scientists Much Lower Among Vaccine Skeptics in Arizona 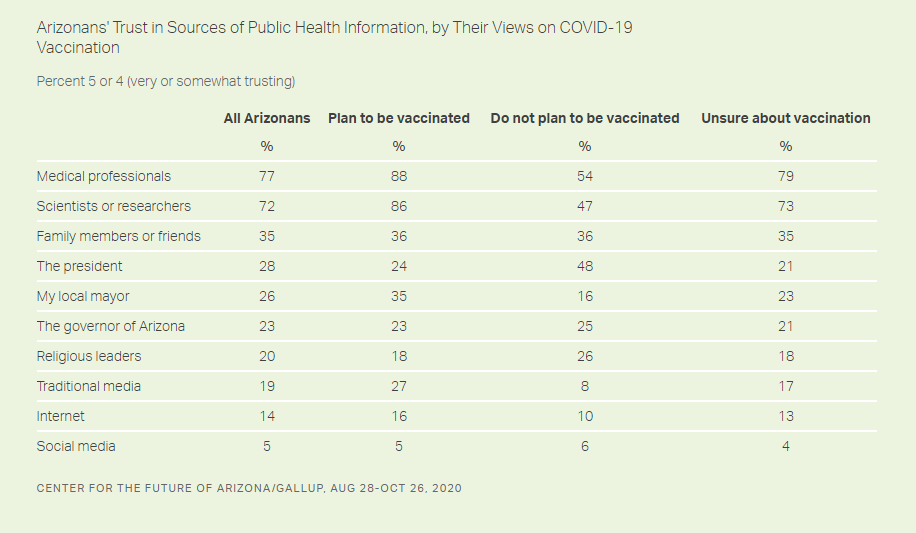 As in other states, Arizona public health officials must understand the factors influencing residents' decision to be vaccinated amid widespread reluctance. Arizonans are clearly most concerned about the safety and effectiveness of a vaccine, criteria that national tracking studies have also consistently highlighted as essential to all Americans. The challenge for Arizona's public health professionals is assuaging fears among those most likely to be skeptical of government-supported efforts to produce and distribute the vaccine.

The good news is that public relations efforts can use the most credible sources of information, messengers that include medical professionals and scientists, along with specific messages about vaccines' proof of safety and effectiveness to raise the percentage of Arizonans who are vaccinated. Public relations efforts would benefit from further study to identify specific messages and messengers -- including celebrities and other public figures -- that may be most effective at building trust among Arizonans.

One consideration for public health professionals wishing to increase acceptance of the vaccine is the importance placed on convenience by low-income Arizonans. This could be especially important in rural communities where the medical infrastructure is not well developed. Further, particularly among the state's Black and Native American communities, encouraging ordinary citizens who have confidence in vaccination to spread the word among friends and family could be helpful.

The Center for the Future of Arizona is a nonprofit organization that brings Arizonans together to create a stronger and brighter future for the state. The Gallup Arizona Project identifies the shared priorities of Arizonans and is a catalyst for regional and statewide action. Led by the Center for the Future of Arizona, the project includes a robust decennial survey in partnership with Gallup to identify the views of Arizonans on what policies and actions will have the greatest impact on Arizona's future.