Arizona Capitol Times:
What Arizonans want in our election system 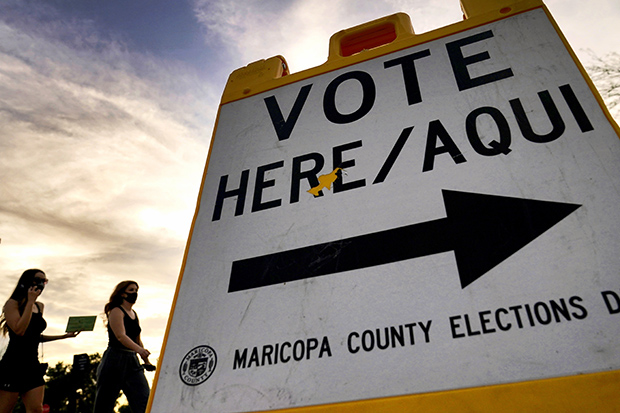 At the Center for the Future of Arizona, we believe data should drive decisions. Toward that end, I’d like to share what we learned from voters in the months leading up to the election about some of our election processes.

In partnership with the Gallup organization, Center for the Future of Arizona surveyed a representative sample of Arizonans from across the state in August and October and asked their views on the most important actions we can take today that will create a stronger and brighter future for our state. We heard from 3,586 Arizonans representing the geographic, demographic and political spectrum of Arizona. We will release the full results of the CFA Gallup Arizona 2020 Survey in April, but thought it timely to share what we learned about the views of Arizonans on our election processes now. The findings below are based on the survey results.

Arizonans do not appear to believe that the current system is serving them well. Only 37% said Arizona leaders focus on long-term, visionary planning. One-third said our leaders represent diverse voices, and just over one-fourth said that their elected representatives work across party lines. Republicans showed greater trust in elected leaders than did Democrats or independents, but less than half of them were positive about the state’s leadership.

Leaders are elected. And if there is low confidence in those leaders there is a strong argument that can be made that it is the election process itself that may be at least in part to blame. A system that is more accessible to all voters and that helps elect leaders who more closely represent the views of their constituents could lead to greater confidence in those leaders. Our survey showed significant support for reforms that make voting more accessible and that lead to outcomes that better reflect the full breadth of political views of all Arizonans.

Not surprisingly, support for these ideas varied by age, income, race and ethnicity as well as party. There were little differences between the responses of urban and rural residents.

Millenials – those between the ages of 18 and 34 – were the strongest supporters of all five reforms, from 88% for early in-person voting to 66% for ranked choice voting.

Among income groups, those at the lower end of the scale were more supportive of the reforms than were the wealthiest Arizonans. About seven in 10 of those making less than $60,000 favored ranked choice voting, for instance, while only half of those making more than $120,000 did.

Latino residents were generally more supportive of the reforms than were other racial or ethnic groups, sometimes narrowly and sometimes by large margins. Latinos were the strongest supporters of early in-person voting (87%) and of mailing all voters a ballot (85%).

While political affiliation clearly played a role in the responses, there is a striking consensus across party lines in support for making voting more accessible. For example, roughly two-thirds of Republicans supported early in-person voting and automatic voter registration when getting a driver’s license. Just under half of Republican supported mailing all registered voters a ballot. However, while 41% liked the idea of ranked choice voting, only 36% were keen on same-day voter registration.

What does this all mean? These data suggest to me that voters want voter registration and voting to be easier. Support for ranked choice also indicates that a strong majority of Arizonans want to reduce the impact of party loyalists on state elections and to better represent the growing independent outlook of Arizona voters.

You may find other meaning in this data, as may legislators. Whatever you take away from it, I hope we can agree that listening to what Arizonans want should inform our thinking and our actions in addressing election processes.