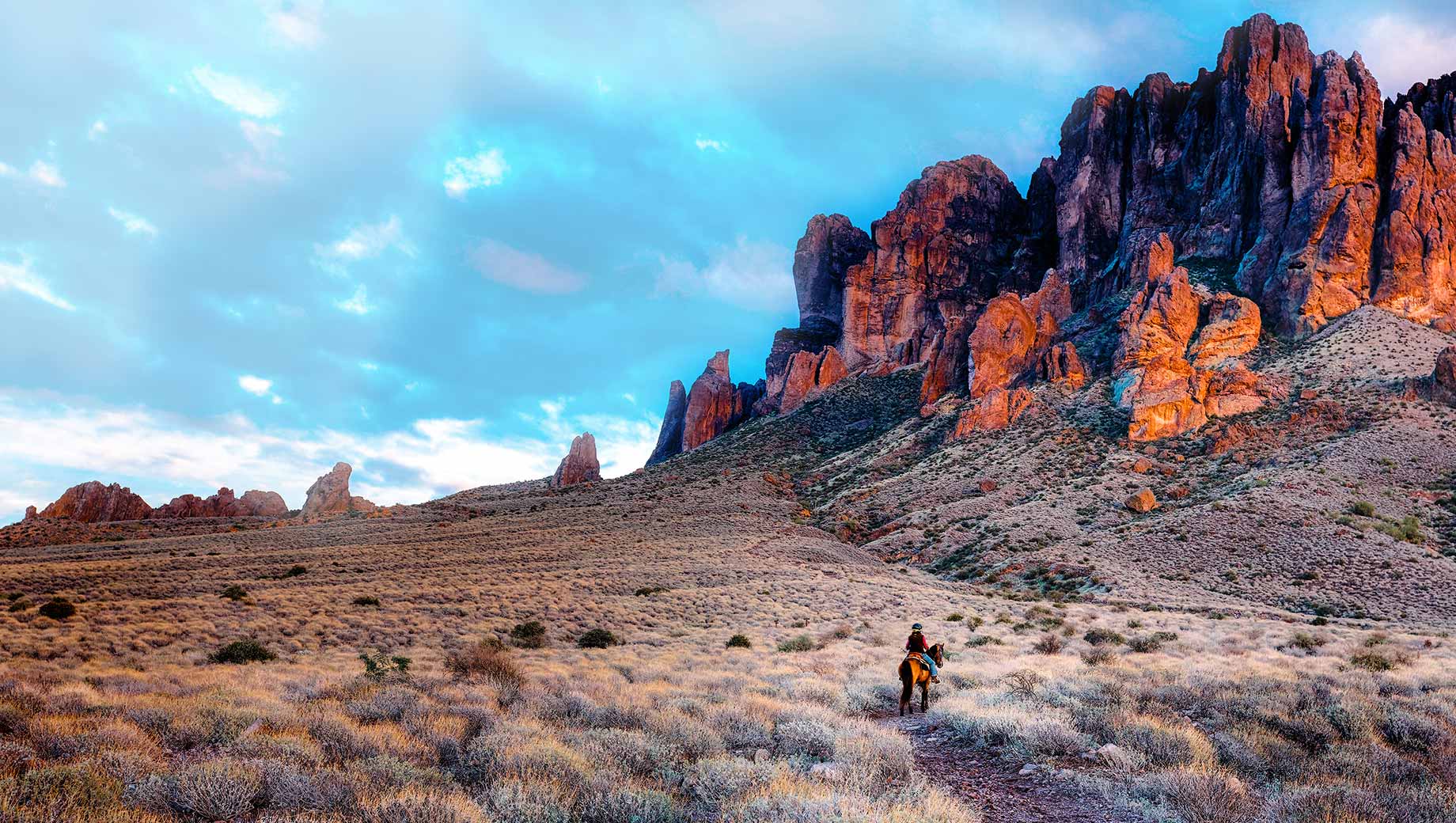 Arizonans are evenly divided in their political party identification, with roughly a third each identifying as Republicans, Democrats and independents. Even with this close political division, a 2020 survey by Gallup and the Center for the Future of Arizona (CFA) finds widespread agreement among Arizonans on a broad range of policy objectives for the next decade.

The Aug. 18-Oct. 20 survey of 3,586 Arizona adults finds a public consensus on the need for state government action promoting high-quality education and healthcare, but also on nationally politicized issues such as immigration, criminal justice, election reform and the environment.

Immigration is routinely among the top issues Americans name when asked about the most important problems facing the country. It is particularly salient in Arizona, which shares a 370-mile border with Mexico and a large Latino population representing about one-third (32%) of all residents.

Arizonans were asked about several specific objectives related to immigration. Strong majorities of Arizonans, including in all major political, regional and demographic groups, support two in particular: 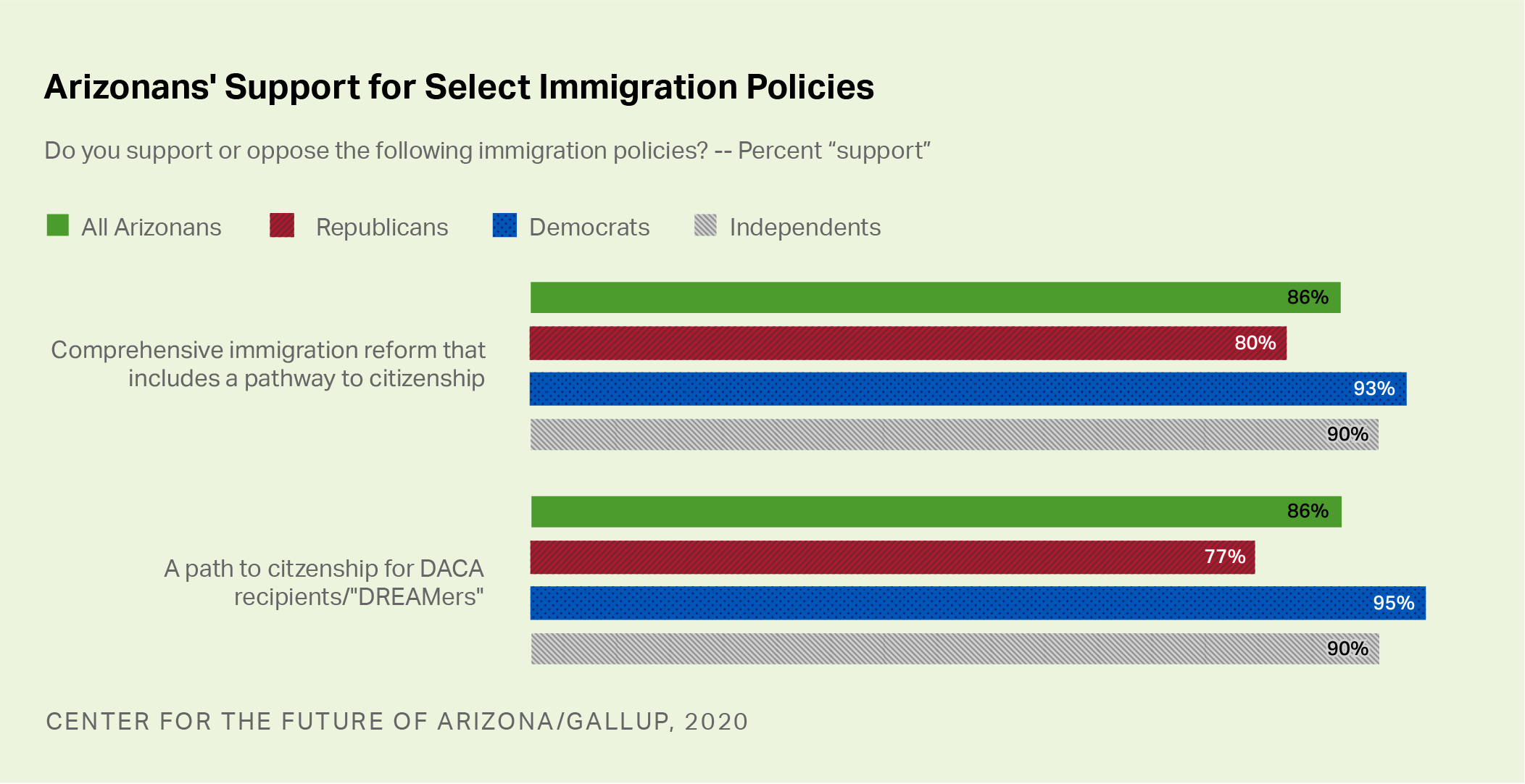 Partisan gaps are wider when it comes to two other immigration policies: regulating Arizona's border with Mexico and increasing deportations for those residing in the country illegally, with Republicans more likely than Democrats to support each.

Arizonans overwhelmingly appreciate the state's natural beauty, with 91% rating it as "excellent" or "good." A similarly high proportion (92%) say it is important for the state to "preserve and protect its rivers, natural areas and wildlife," one of the highest levels of consensus seen in the Gallup Arizona survey.

However, Arizona faces a number of specific environmental pressures related to climate change and the state's rapid population growth. Arizonans broadly support a number of goals in response to such challenges, including actions to protect rural water supplies, prevent forest fires and reduce heat islands (places where infrastructure such as buildings and roads absorb and re-emit the sun's heat) in urban and rural areas. All three actions are rated "very important" or "important" by at least three-fourths of Republicans, Democrats and independents. 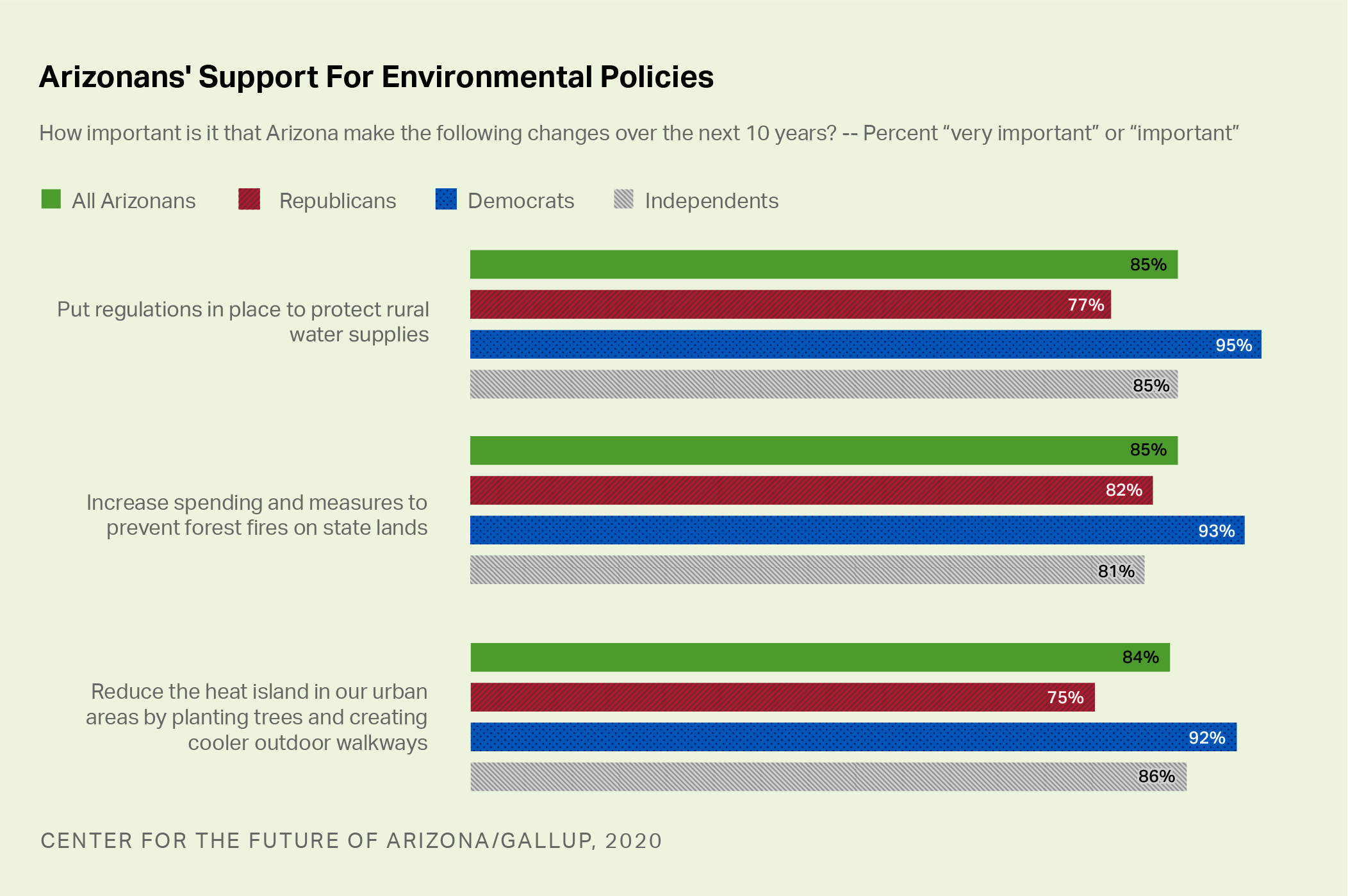 Although there is not majority agreement about the issue, Arizonans are more likely to disagree than agree that law enforcement and the criminal justice system each treat everyone in the state equally. Arizonans are particularly skeptical of the state's criminal justice system, with just one in four (26%) agreeing that it treats everyone equally and almost half (45%) disagreeing.

One proposed change to the state's criminal justice system meets with strong support across the political spectrum. More than three-fourths of Arizonans overall (77%) agree that the state's prisons should focus more on rehabilitation, including substance abuse, mental health and reentry programs and services. While almost nine in 10 Democrats (87%) in the state support this idea, so do strong majorities of Republicans (65%) and independents (79%).

Arizona had to make fewer changes than many states to accommodate voting during the COVID-19 pandemic in the 2020 presidential election, as the state has a decades-long history of mail-in ballots and early voting.

The Gallup Arizona Survey asked Arizonans whether they favored or opposed making two additional options available for voting: automatically registering Arizonans to vote when they apply for a driver's license or state ID and sending all registered voters a mail-in ballot. About three-fourths of Arizonans favor each idea -- though here there are partisan differences, especially with regard to sending all voters a mail ballot. Still, nearly half of Republicans favored universal mail ballots before last year's election. 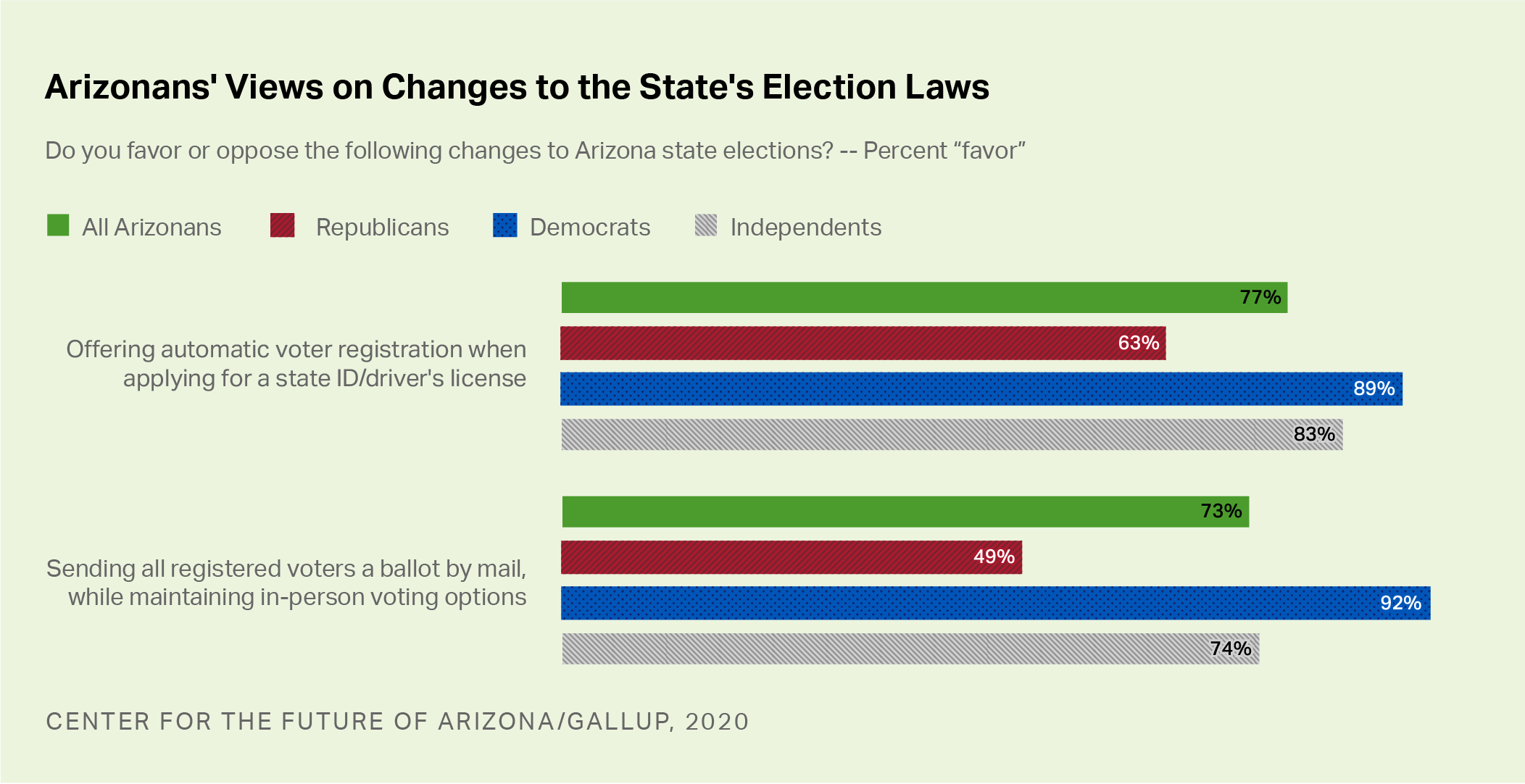 Support for both measures is also particularly widespread among younger Arizonans, with more than 80% of those aged 18 to 34 favoring each.

Overall, the 2020 Gallup Arizona survey demonstrates that despite the state's partisan divide -- a situation that mirrors the political polarization in the U.S. overall -- Arizonans agree on a set of broad objectives for the next decade. Consensus on these priorities establishes common ground from which all Arizonans -- from government and business leaders to communities and individuals -- can participate in moving the state forward.

Read the full report on the Gallup Arizona survey.

Results for this CFA/Gallup survey are based on English- and Spanish-language mail surveys completed by 3,586 Arizona residents aged 18 and older on Aug. 28-Oct. 26, 2020. Address-based sampling methods were used to ensure the results were representative of the state’s total adult population. Black and Native American residents were oversampled to ensure enough completed interviews to analyze their responses independently.
News Categories